Treasury Board bargaining: April talks will be Trudeau’s last chance to deliver on commitment to public service workers 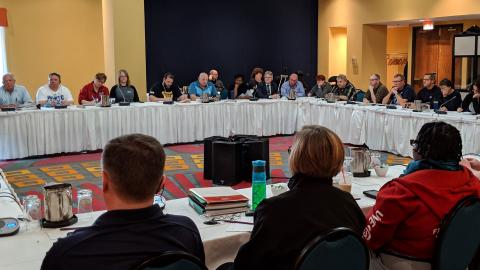 PSAC bargaining teams representing 90,000 members under Treasury Board only saw small movement from the government at talks last week despite a rapidly closing window for Prime Minister Justin Trudeau to deliver on his commitment to public service workers.

After some small positive steps at talks in February, PSAC was hopeful that the government would come to the March meeting ready to make major progress.

“Unfortunately, the government once again squandered the opportunity to make major progress towards a fair contract,” said Chris Aylward, PSAC’s National President. “Since coming into office, Trudeau committed to restoring the government’s respect for the public service. Those are nice words, but reaching a fair contract before the federal election in October is the only way he can deliver on that promise to PSAC members.”

Yet, for most of that time, the government has repeatedly delayed progress and resorted to making insulting offers, such as the November proposal for a two year wage freeze. Though the government has since moved away from that proposal, it continues to insist on an annual wage increase of only 1%, around half the rate of inflation.

“Trudeau’s window to deliver on his commitment to support public service workers and the vital services they provide Canadians is closing, but we’re willing to give him one more chance in April,” added Aylward. “We’re going to ramp our mobilization between now and then to make sure the government understands that they are running a high risk if they don’t give PSAC members a fair deal before the election.”

“PSAC members are still waiting to get paid properly under Phoenix, and they’re still waiting, after three years, to be compensated for all the hardships they’ve endured because of these countless pay problems. They shouldn’t also have to wait for the fair working conditions they deserve.”