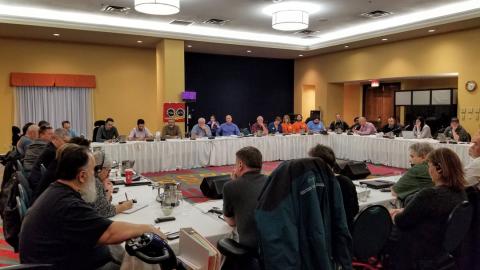 The Liberal government tabled a series of offensive counter-proposals in the latest talks between the Union and Treasury Board. After months of Government delays and insulting offers, PSAC bargaining teams representing 90,000 federal public service workers have declared impasse and filed for a Public Interest Commission (PIC) to help negotiations move forward.

The Government proposed to increase wage rates by only 0.75% per year for 4 years, well below the rate of inflation, and refused to make the increase retroactive to the start of the term of the collective agreementIn addition, they requested the new agreement only take effect 365 days after it is signed by both parties, amounting to a two-year wage freeze for PSAC members.

“​It’s outrageous that the Trudeau government won’t even come to the table with a serious offer after our members have been waiting three years to get paid correctly under Phoenix,” said Chris Aylward, PSAC National President. “We’ve tried to get this government to bargain in a fair and respectful manner – it's clear we’ve reached impasse.”

“Prime Minister Trudeau promised a new relationship with public service workers – one of respect – but that couldn’t be further from what happened this week. This is a real betrayal.”

Treasury Board also ignored important demands for improvement in areas such as work-life balance, workload, leave provisions, and use of temporary workers.

“We’re angry, and we’re not going to let the Liberal government get away with this. Every day PSAC members show up to work not even knowing if they’re going to get paid properly – they deserve working conditions that reflect that dedication, as well as the value of their work. We won’t back down until they get it.”