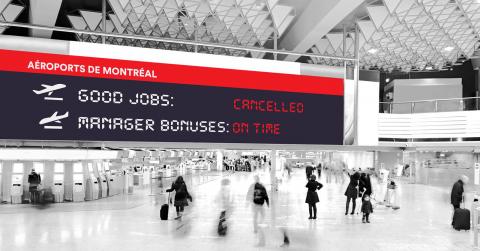 The CEO of Aéroports de Montréal (ADM), Philippe Rainville, is threatening layoffs during a period of record airport revenues unless airport workers accept a pay cut of up to 31 percent. This pay cut proposal is galling given the airport’s financial success. This includes Mr. Rainville’s annual compensation of over $400,000, and the million dollars in executive bonuses he also receives a share of.

The workers under threat, members of PSAC, currently perform a wide range of services, including security, administrative support, reception and information assistance.

PSAC has launched a digital ad campaign on billboards leading to the airport and on social media, urging the public to demand that the airports’ management stop their greed-driven attempts to slash wages and for the Minister of Transport, Marc Garneau, to intervene.

“This is corporate greed, plain and simple, said Chris Aylward, PSAC’s National President. “These workers have generated record revenues for ADM, but its wealthy CEO wants even more, at the expense of these workers, their families, and the wellbeing of travelers.”

“Indeed, contracting-out work to the lowest bidder will lead to a major reduction in service quality for travelers at the Montreal airport,” added Yvon Barrière, Quebec Regional Executive Vice-President of the Public Service Alliance of Canada. “Our members have extensive experience with airport operations and they care deeply about security and the quality of service travelers receive.”

Last year, ADM staff received the World Airport Awards for 6th Best Airport Staff in North America. At the time, ADM Chief Executive Officer Philippe Rainville noted that the award “recognizes the quality of service and reception offered by all employees who work directly with travelers.”

PSAC is currently waiting to hear back from ADM management on a counter-proposal the union submitted in an effort to stave off the proposed lay-offs.