November 20: Transgender Day of Remembrance and the work ahead

As violence against transgender people continues to persist at alarming levels, we must all learn to be better allies by helping end discrimination against trans people in their communities and workplaces. Transgender Day of Remembrance (TDoR) is an opportunity to do just that.

Each year for TDoR, we honour and memorialize trans, two-spirit, non-binary, gender non-conforming and gender diverse people who have lost their lives to transphobic violence. November 20 serves as a reminder to allies to continue to advocate for the inclusion and safety of trans and non-binary people. It is also an opportunity to recommit to combatting transphobia.

This important day of remembrance was started by trans advocate and activist Gwendolyn Ann Smith to honor Rita Hester, a Black trans woman who was murdered in Boston in 1998. Rita’s murder is still unsolved, and too many transgender victims of violence continue to suffer the same fate.

Attacks on the rights of trans people

Trans and gender diverse people face many forms marginalization, and the national blood ban is just one example. While we welcome the recent announcement of the plans to move to gender-neutral, behaviour-based assessments of blood donors, those changes may not take effect for up to a year. Until then, Canadian Blood Services and Héma-Québec will continue to adhere to old policies that reduce access to blood donations and discriminate against men who have sex with men, non-binary people and trans people.

We also recently saw proposed legislation out of Quebec that would require transgender people who do not undergo surgery to have separate "sex" and "gender" categories on their ID. Though the government has walked back on this infringement of privacy, it is a reminder of the ongoing fight for trans rights.

Our continued vigilance will help ensure discriminatory legislation and policies do not target our transgender friends and colleagues. Trans people deserve to be treated with respect and care — as human beings, like everyone else.

PSAC is an advocate for the rights of trans and gender diverse communities year-round. We have developed several resources to help members deepen their understanding of the experiences of trans people and learn how to create more trans-inclusive spaces.

We encourage you to attend a virtual vigil or find an event happening in your community to recognize Transgender Day of Remembrance. Trans rights are human rights. Let’s honour the trans and gender non-conforming people who have died due to transphobic violence. 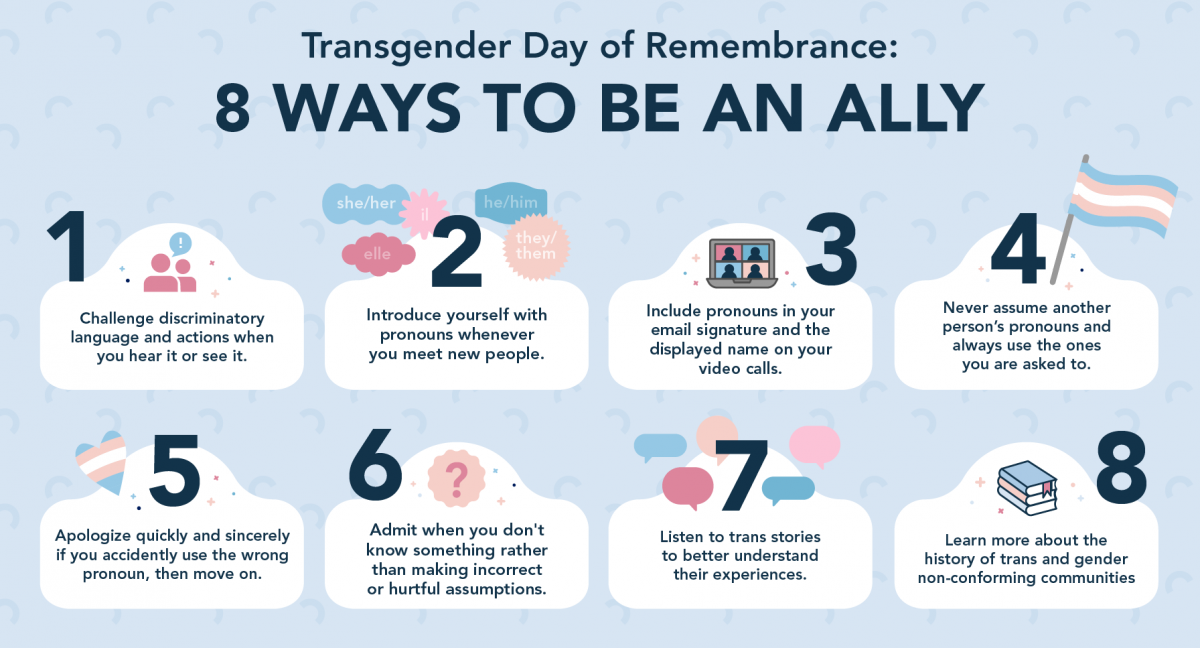