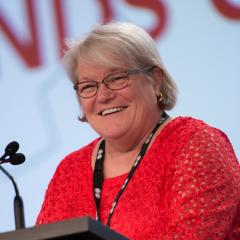 After months of stalling, Minister Judy Foote finally met with National President Robyn Benson on August 19 to discuss the on-going problems with the Phoenix pay system. At the meeting, Benson told the Minister to commit to providing the necessary resources to fix the Phoenix, and apologize to the affected workers.

Benson and Government Services Union National President Donna Lackie explained to the Minister that Phoenix in its current state is grossly inadequate for what it needs to deliver. The system has serious shortcomings and it just cannot deal with all of the complex federal public service pay rules.

“We were there to tell Minister Foote that she needs to allocate the money and human resources now to fix the underlying problems,” said Benson. “We need to see much more effort by the government into resolving these problems.”

Benson and Lackie made Foote aware that the workers at the Miramichi pay center are under incredible stress as they struggle with this deficient system. They also made it clear that PSAC members are suffering real hardship that include having unpaid bills, exhausting their savings, and even quitting their jobs in some cases.

PSAC members and many other federal public service employees are still going without pay, being paid the wrong amount, or still have other compensation owed to them.

“Our members deserve an apology, and more importantly they need to be assured that the government is making it a priority to address the problems as quickly as possible,” said Benson. “Minister Foote and the government need to be accountable for meeting their October 31 deadline commitment.”

PSAC will continue to work closely with Treasury Board and departmental officials as long as the problems continue. Our number one priority is making sure PSAC members are being paid properly and will be compensated for the hardship caused by Phoenix.