The most recent results from the Public Service Employee Survey show that, despite some improvements over the years, significant barriers remain for marginalized groups. The annual survey, which asks questions about peoples’ experiences at work, provides a picture of the reality facing workers from diverse groups, and that picture is not always a rosy one.

Discrimination and harassment still a problem 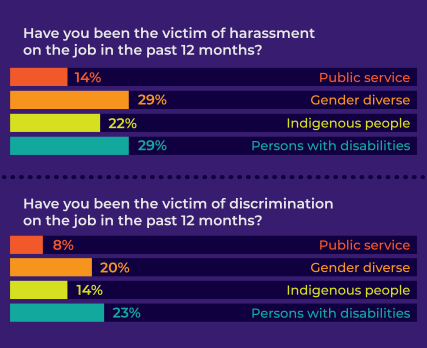 Discrimination and harassment at work remain a significant problem for persons with disabilities and gender diverse* people, who reported the highest levels in the public service. About one in five employees in each of those groups reported having been the victim of discrimination in the past year, and almost one in three said they had been harassed. Indigenous employees also reported significant levels of discrimination and harassment, at 14 and 22 per cent, respectively.

Twelve per cent of racialized employees and 11 per cent of those who identified as lesbian, gay, bisexual or another sexual orientation (LGB+)** reported discrimination.

“While rates of discrimination and harassment have fallen over the last decade, these statistics remain disturbingly high,” said Chris Aylward. “The public service should be a good place to work for everyone.” 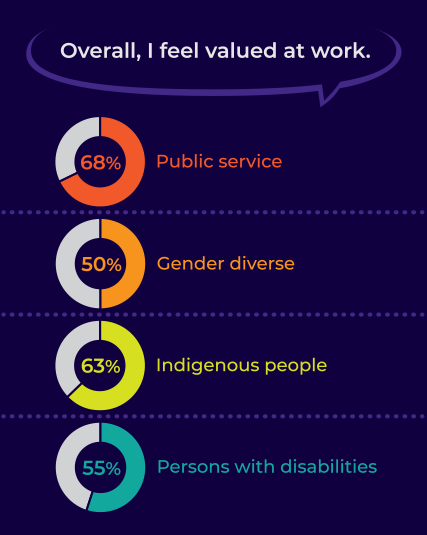 Disappointing results were also seen when it comes to how members of equity-seeking groups experience their workplace on a day-to-day basis.

For example, gender diverse people and persons with disabilities and were significantly less likely to report:

More than half of employees with disabilities reported having requested accommodation at work, with 17 per cent of those saying that no measures were taken to accommodate their needs. Of those that were accommodated, 22 per cent were not satisfied with the accommodation measures taken by the employer.

Not surprisingly then, more than one in four employees with disabilities said that accessibility or accommodation issues have adversely affected their career progress and one in three said those issues cause them stress at work.

“PSAC is urging the government to take these results seriously and address them,” said Aylward. “One way they can start to do that is to implement all of the recommendations of the Joint Union-Management Task Force on Diversity and Inclusion”.

* “Gender diverse” is the category used in the survey results to refer to those who identified their gender as something other than male or female in the survey.