Mining companies operating in Guatemala, the majority of which are based out of Canada, continue to exploit the people, land, and environment for profits with deep ramifications for working and Indigenous peoples. These companies face little to no regulatory process to ensure human rights, health, safety, and environmental stewardship. Rather, they are often afforded all the necessary approvals with great ease and have rarely been held to account.  For the Indigenous Xinka people and many others this has meant displacement from lands and homes, food insecurity, violence, and oppression.

Despite this adversity the Xinka people have established the Xinka Parliament which works to preserve their culture, language, and history in addition to doing important community organizing work. 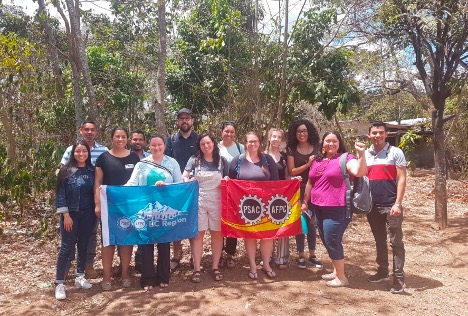 The Xinka Parliament has been active for over a decade in resisting mining operations by Canadian Tahoe Resources with inspiring successes. Widespread community support has made it possible to keep up a 24/7 resistance camp at the nearby Escobal mine that has effectively prevented mining on its territory for years.  Many families take 24-hour shifts to physically be present at the site blocking operations.  There are so many families engaged that each only does a 24 hour shift every 3 or so weeks.  Our group met with the Xinka Parliament and also stopped by the resistance camp as an action of solidarity.  The dedication and resilience of the communities is inspiring and indicative of their collective strength.

Through organizing, advocacy, direct action, and international solidarity the Xinka were successful in 2014 in having a Canadian court agree to hear for the first time a human rights case regarding Tahoe Resources, the Canadian company operating the Escobal mine from 2009 until 2019. This set an important precedent whereby Guatemalans, and possibly other oppressed people in other countries, can seek accountability and justice against Canadian corporations in the Canadian court system if they are unable to do so in their own country. In July 2019 an agreement was reached between Tahoe Resources and the land defenders whereby the company was forced to admit wrongdoing and infringement on human rights for acts of violence committed against them. Since then, the Escobal mine has been purchased by Vancouver based Pan American Silver. 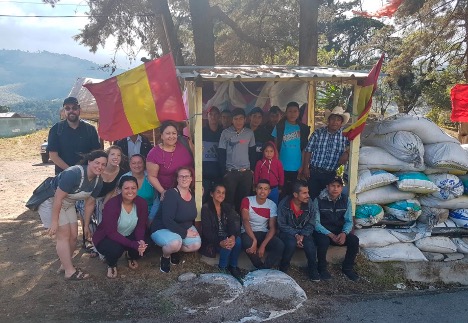 In reflecting back on my experience and the stories we heard from members of the Xinka Parliament and others I am proud of my union (PSAC) for continuing this important international solidarity work through its Social Justice Fund. Sharing stories of struggles and successes across borders, cultures, and languages is a strong act of solidarity and support in achieving justice and accountability through greater awareness. Through our personal volunteer commitments to participate in the annual delegations organized by the PSAC and local partners we’re being present and building connections which is noticed and appreciated by community members and allies. Those in positions of power who have the ability to affect positive change also become aware of such solidarity actions.  I am thankful and appreciative of those who spent time with us when there are many pressing and important matters.  I’m grateful for the opportunity to participate in this delegation and will continue supporting the important work of the organizations we met with.

Todd is a member of Agriculture Union, Local AGR 20044 and alternate VP for PSAC BC Region. For more, you can watch a video interview of Todd produced by the PSAC BC Region.