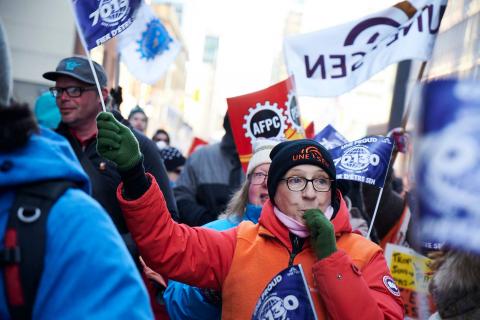 PSAC welcomes the new funding commitments made in today’s budget to address the Phoenix pay disaster, but they fall significantly short of what is required to end the pay nightmares of Canada’s federal public service workers.

The over 200,000 workers that have been impacted by Phoenix need long-term funding dedicated to: eliminating the backlog of pay problems; stabilizing Phoenix; compensating workers for their many hardships; and providing enough resources to properly develop, test and launch a new pay system. The amounts budgeted for the next 4 years will not be sufficient to meet those objectives, and over 70% of that funding is earmarked for this fiscal year, leaving little for future needs.

Budget 2019 also does not tie any funding to a timeline for the resolution of Phoenix problems, nor does it commit to a permanent increase in staffing required to stabilize the system for good. It also allocates nothing for the development and launch of a new pay system.

“Our continued mobilization for action on Phoenix has convinced the government to take greater action, but Mr. Trudeau’s wait-and-see approach is not the long-term plan our members need,” said PSAC President Chris Aylward.

“We know we will have to work on stabilizing Phoenix for years to come, and there are hundreds of thousands of cases to still work through. The budget doesn’t even put funding aside for developing and deploying a new pay system or compensating our members. This budget just won’t cut it.”

“Every single day our members show up to work and deliver the critical services Canadians depend on. They deserve for their employer, this government, to pay them correctly, on time – and to compensate them for all the damage done to their lives.”