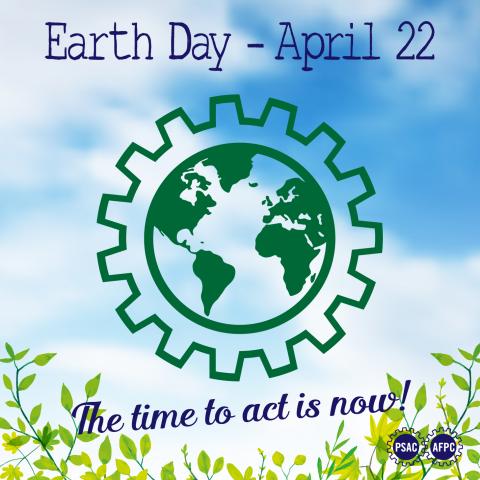 This Earth Day, PSAC is calling on all governments to act on climate change.

The fight against climate change will require a public service direction and response equal to that of the Second World War. PSAC members work at Environment Canada, Natural Resources Canada, Parks Canada and all of the other federal departments that need to be involved in a successful campaign. They are experts in a broad range of climate change issues.

Federal public service workers are ready to act. Are our governments?

The Liberal government has committed to developing a pan-Canadian framework to address climate change. At COP 21 in Paris, the government promised to do its part to limit global warming to 1.5 degrees Celsius over preindustrial levels. This goal will require global zero emissions sometime between 2030 and 2050. Canada has a lot of work to do to reach these targets. The government needs to be fearless in its efforts to make it happen. Nothing short of total mobilization is needed.

PSAC supports the “One Million Climate Jobs Challenge”, a plan developed by the Green Economy Network (GEN).  PSAC is an active partner in GEN.

We need to do more and invest more resources. PSAC members care about climate change and the environment, which will be made worse if we do not act.

PSAC calls on the government to:

We can win this battle and create a world that is more fair and equal.

Visit the Green Economy website and find out more about the One Million Climate Jobs Plan.

The time to act is now!